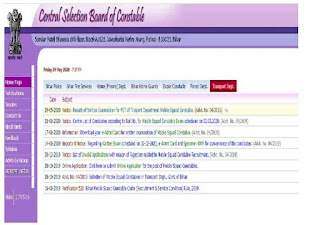 Bihar Police Result 2020: Central Selection Board of Constable (CSBC) has recently announced the  Transport Department Mobile Squad Result 2020 on its website. Candidates appeared in the  CSBC Bihar Mobile Squad Constable 2020 written exam against the advertisement number 04/2019 can check the result on the official website of CSBC.i.e.csbc.bih.nic.in.

CSBC Bihar Mobile Squad Constable 2020 was held on 2 February 2020 at various exam centres to recruit 496 vacancies. According to the result, a total of 37,771 candidates applied for the exam out of which only 29,073 candidates appeared in the written test.

On the basis of the performance of the candidates in Written Test, The Central Selection Board of Constable has released the result in the form of PDF at its website. Candidates can check their roll numbers in the PDF file and appear for interview round which will be scheduled in the due course of time.

The board has yet not announced the date and time for CSBC Bihar Mobile Squad Constable PET 2020 due to coronavirus outbreak. The schedule for the interview will be announced on the official website in due course.

The board will release  CSBC Bihar Mobile Squad Constable PET 2020 PET Admit Card only on its website. No paper admit card will be posted to the candidate’s addresses as per the notice. All candidates are advised to keep checking on the official website for latest updates. Candidates can directly check their result by clicking on the below link.

Opportunities Are Waiting For You😉